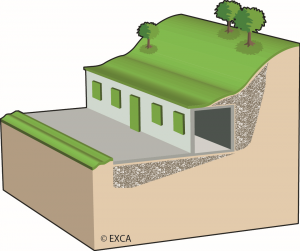 The courtyard is placed on soft soil like the castle island, small islands of more than 200 years of old waste and still other parts are based on old marine area. Settings caused by increased traffic loads called for a renewal of the courtyard and a load compensation solution.

Possibilities like pile foundation, preloading or intensive compaction of the sub soil were considered. Load compensation with expanded clay proved to be the most economical and least disturbing solution during construction of the courtyard.

Depending of the expected traffic load and sub base conditions, a 30-60 cm layer of expanded clay was installed. On top of that 20 cm concrete slaps was applied and finally cement stabilised gravel and granite pavement. The expanded clay was delivered in 100 m3 truckloads and tipped off directly on the construction site. A small Bobcat made the installation. Compaction was managed by small vibrating plates. In 1993, a 10-year control of the courtyard was made. The measuring result showed that the settings of the pavement, if any, were below 10 mm.